Myths  are a construct which  serve to denote the ‘cultural fabric’ of a group; a shared culture creates myths which support the beliefs and biases of the group (1). Undoubtedly medical involvement in childbirth has done much to improve outcomes for many women and their newborns who experience medical or pregnancy related complications, but in recent years there has been increasing evidence that widespread medical involvement in childbirth is not always in the best interests of women experiencing straightforward low risk pregnancies. Myths about place of birth and safety, risk assessment and technological advances have led to the myth of high expectations and positive outcomes for childbearing women. These myths are shaped by government policies and have had an impact on both the resources for maternity care and also practices within maternity settings. What we wish to explore here are the myths about contemporary childbirth that include: the place of birth, caesarean sections (C/S) and midwifery led care.

Hospital is the safest place for birth
Perhaps the greatest myth about childbirth is that it is in the best interest of mother and baby that birth takes place in hospital. The past several decades have witnessed a largely consistent and persuasive argument that the hospital is the best and safest place for babies to be born. Subscription to this overriding single policy has led to little choice for women in terms of place of birth and has resulted in almost complete elimination of home birth services in many countries.
The drive to concentrate maternity services into larger units with the provision of multidisciplinary care undoubtedly improves outcomes for women with complex pregnancies. However, the trend across Europe for birth to occur in large units is problematic for women who are at low risk of complications as larger units have a greater propensity for intervention in labour and lower rates of spontaneous births (2).
Alternatives to this provision of maternity services is home birth  - but in many European countries, with the exception of the Netherlands and the United Kingdom (UK), home birth are difficult to obtain. Obtaining a home birth depends on local regulations and the availability of midwives. Midwives experience difficulties in obtaining insurance to provide home- birth service and payment for midwives may also be an issue. Relevant authorities do not always provide information to women about home birth. Couples frequently experience considerable resistance to home birth and the majority of European countries report that less than 1% of births take place at home (3).
Marjorie Tew (4) first demonstrated that better outcomes for mothers and newborns was not caused by increased hospitalisation and medical care but was brought about by the improved health of mothers. More recently, the Birthplace study has provided data that identifies the risks and benefits of giving birth in a variety of settings (5). This identified that for women having a second or subsequent baby, a planned home birth reduces the risk of interventions for the mother and does not increase risk for the baby. For women having a first baby, a planned home birth slightly increases the risk for the baby and there is an increased probability of transfer to hospital.
Birth centres are another alternative to birthing in large maternity units. These have been successfully introduced in several European countries and in Germany, the Netherlands and the UK, women increasingly have the option of attending a midwifery led birth centre. Birth centres may be free standing or may be adjacent to or within maternity hospitals. The Birthplace data identified that when birth took place in either a freestanding or alongside birth centre, there were no significant differences in adverse perinatal outcomes compared with planned birth in an obstetric unit. These women had significantly fewer interventions, including substantially fewer intrapartum C/S, and more ‘normal births’ (5).
The myth that childbirth can only be  considered safe if it occurs in hospital has been challenged by the National Institute of Clinical Excellence (6) which has published guidelines for the intrapartum care for low risk women. This requires that maternity care providers offer low risk pregnant women options for the place of birth. Options must include the provision of home birth, the availability of birth in a freestanding midwifery unit, alongside midwifery unit or obstetric unit. Throughout Europe most pregnant women have no choice other than to attend their local maternity hospital to give birth.

Caesarean section is now a safe procedure
The next myth we wish to explore is the safety of C/S. Throughout Europe and even within individual countries there is substantial variation in C/S rates. Cyprus had the highest overall rate, at 52.2%, with the Netherlands, Slovenia, Finland, Sweden, Iceland and Norway the lowest with rates below 20% (3). The risk factors for C/S, such as maternal age or parity, are not sufficiently marked to explain the wide disparities. Countries with high proportions of older mothers have both higher and lower rates.
There are global concerns about increasing C/S rates and the impact this has on both morbidity and mortality for women (7, 8) and while considerable improvements have been made in the safety of performing C/S, there is emerging evidence about the potential long term effects on the infant from unnecessary C/S. Early adverse effects includes the potential for impaired lung function, reduced temperature control and blood pressure, alterations to metabolism including feeding and more worryingly immune phenotype (9). Recent evidence has identified alterations in the infant’s microbiome associated with abdominal rather than vaginal birth. This may be linked to the emerging evidence that children delivered by C/S have an increased rate of immune related disorders such as asthma, diabetes and obesity which may be related to their altered microbiome (10). Increases in systemic connective tissue disorders, juvenile arthritis, inflammatory bowel disease, immune deficiencies and leukaemia have also been reported. Another new area
of research is in relation to the potential for the mode of birth to have an impact on the epigenetic profile of the newborn infant (11). If this is so, then the mode of birth may have a generational impact on future populations.

Obstetric led care is best for all women
The third myth we wish to explore is that obstetricians should be involved in the care of women experiencing straightforward low risk pregnancies. While team work between midwives and obstetricians is key to the provision of maternity care, the evidence is widespread that obstetric involvement in low risk women is unnecessary and leads to an increase in intervention in comparison to midwifery models of care. Midwifery led care for normal pregnancy and childbirth is an efficient and effective model of care and has been promoted as part of the Birth- place studies (12). Providing midwife-led care for low risk women may offer a means of reducing costs compared to obstetric led services (13) and the recent Lancet Series on Midwifery states that midwifery is the solution to the provision of high-quality maternal and newborn care.

The way ahead
A medicalised birth is not the best outcome for every woman and traumatic birth experiences are well documented. Statistics and research findings challenges the widespread belief that out of hospital births are not safe for women with straightforward pregnancies.
In changing the debate around child- birth and to ensure that maternity services meet the needs of women, decision makers and providers of maternity care should ensure that women have information about the safety of birth in various settings and ensure that they have options in relation for their care. The presumption that pregnant women with low risk of complications should attend hospital under obstetric led care to give birth is outdated. The awareness that rising C/S may have long term health problems for infants is a concern and the evidence indicates that the way to reduce unnecessary interventions in childbirth, without placing the mother or baby at increased risk, is to provide women with one to one midwifery care. This is best provided away from obstetric services in alongside or free standing midwifery units and should include the option for home birth.
Important to the expansion of midwifery led care is that collaborative relationships between professional groups must be maintained to ensure best care for women and their newborns. Trust and respect for each member of the multidisciplinary team is required and is particularly important to ensure seamless transfer of services between midwifery and obstetric care when this is required. 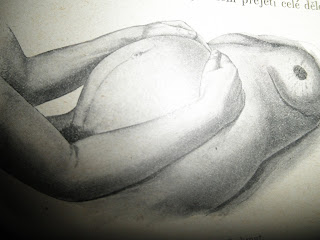 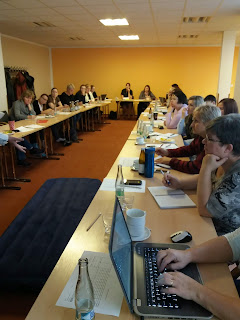 WHO support of midwifery Infographics The case for midwifery What is midwifery? Midwifery is "skilled, knowledgeable ... 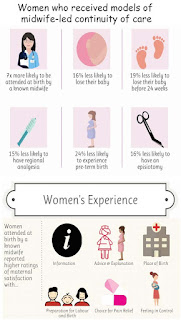